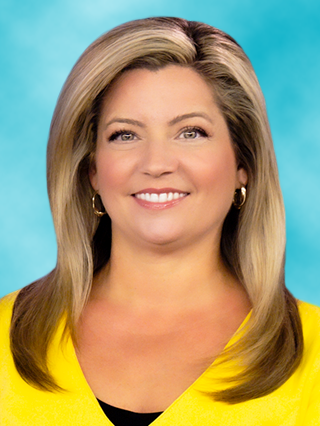 Meteorologist Cari Peugeot has been a part of the WSBT since the summer of 2001! She started out as weekend meteorologist. Now in the mornings, she was named Chief Meteorologist in 2021. Being a part of this area for so long, Cari has covered many weather extremes like seeing tornados one day, then snow the next. From those rare tornados in October and November (2001), to 36" of lake effect snow in one day (2011), to days topping 100 (2012) and everything in between, she's seen and forecasted it all! Cari really loves forecasting the changing seasons and the challenging forecasts that come along with living near Lake Michigan.

Cari grew up in Harlan, Indiana which is just outside of Fort Wayne. She attended Indiana University Bloomington where she has a degree in Geography and Atmospheric Sciences. Cari also worked (and enjoyed winter) in Traverse City, MI before moving to South Bend.

Cari lives in South Bend with her husband, Bill and their 3 kids. You might run into them at any ball field in the area or pass them on many of the bike trails too. They enjoy getting out and being active at many of the local parks.